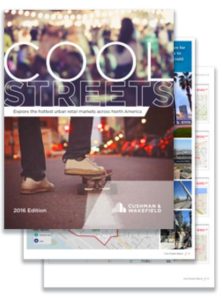 What is “cool?” While most real estate brokers prefer to deal in hard numbers and facts, Cushman & Wakefield took a stab at trying to define the elusive “cool” in their latest research publication Cool Streets. Cushman & Wakefield surveyed real estate professionals across the county to find the top streets in North America worthy of the coveted title “cool.” Those surveyed were asked to identify the trendy streets in their communities and then assign the streets scores in categories such as walkability, affordability, restaurants, nightlife, and even access to vintage-thrift stores.

The result of the surveys was a report detailing the top 100 “cool” streets in America, which included two of our very own Richmond neighborhoods! Carytown and The Fan both made the list of “cool” streets, receiving high scores in nearly all of the livability and retail categories. Here at CRC, we’re particularly excited about the ways in which this report can supplement the RVA Indicators project and provide another lens through which we can evaluate the state of our region.

Some of the most interesting Richmond-related findings include:

The RVA community should be proud to have not just one, but two neighborhoods represented in the top 100 “cool streets.” However, as a community, we should also look to this report to see not only what we are doing well, but also areas in which we can improve. The Fan and Carytown are undeniably hip places to live, work, and play, but there’s still plenty of room for improvement when it comes to insuring that the transit-dependent have equal access to these “cool” neighborhoods. The full Cool Streets report can be viewed or downloaded here.